I started high school in 1973 — just one year after Title IX went into effect. Growing up, I really had no idea that there were inequities when it came to girls and boys sports.

However, looking back now it is very clear. Here are just a few of the differences that were firmly in place while I was growing up:

One other difference that I noticed at the time was that basketball rules were different for boys and girls.

When I was in sixth grade in 1971, I played basketball intramurals. This was my first opportunity to participate in an organized sport. Our coach would run drills and teach us the rules, and we would play friendly games among ourselves.

I loved it and never really questioned why the rules were different for girls and boys.

The explanation we were given was that “most girls just could not do all that running.” I was lucky enough to play rover, so I was not bothered by this.

When we started playing in our CYO league the following year — 1972 — the rules changed. We now played by “boys rules.” (Yes, this is what we called them.) I did not know it at the time, but this was because of Title IX.

Imagine — there needed to be a law passed that acknowledged that girls were as capable of competition as boys!

As the years went by, I became increasingly aware of, and bothered by, other differences and inequities. When I was in high school, the boys teams always had much better uniforms. The baseball players had everything, from head to toe — they looked like pros!

Meanwhile, the girls softball team wore the same jerseys that were used for both basketball and volleyball, and we had to provide our own white shorts to complete our uniform.

Additionally, all of the girls teams (except softball) wore skirts as part of our uniform. It was not until my senior year in 1977 that each team was asked to vote on whether or not we wanted to switch to shorts. It is hard to imagine a girls basketball team playing in skirts nowadays!

I started coaching girls athletics in the late 1980s. I was now in a position where I needed to advocate for my girls. It was not unusual for my girls volleyball team to be kicked out of the gym because the football team needed an indoor space because of bad weather.

This was probably my first real “Title IX Battle.” These types of struggles are, sadly, still going on. Women are still playing catch-up to this day. There have been great strides, but there is still a long way to go.

I am grateful for all of the opportunities I have had since Title IX was passed, including being able to:

If I was an adult just 50 or so years ago, I would not have been allowed to do these things. It still baffles my mind to think about how unfair this was. I am so grateful for Title IX, and equally grateful that I had a small dose of what life was like before it. 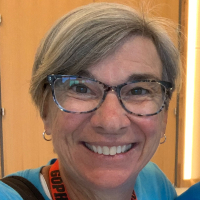 Megaera Regan is a retired elementary physical education teacher from the Port Washington School District on Long Island. Megaera taught in Port Washington for 31 years and was the recipient of the 2018 NYSAHPERD Elementary PE Teacher of the Year award, as well as the 2020 SHAPE America Eastern District Elementary Physical Education Teacher of the Year award.