In the fall of 1971 — less than a year before Title IX was passed — I was hired to head the Department of Physical Education at Kansas State University (K-State). I was charged with combining the men’s and women’s departments, supervising the planning and construction of a building, overseeing the revision of the curriculum for physical education (PE) majors and the required PE program, developing research and instructional laboratories, and instituting faculty research programs.

I was aware of the daunting nature of the task of being a department head, but I did not count on having to deal with the athletic wars that occurred over the next few years (e.g., negotiating facilities use agreements, requesting funds from higher administration for women’s athletics, negotiating with faculty about academic vs. coaching duties).

At the time, the men’s athletic budget was approximately $1.5 million, while women’s athletics received only a few thousand dollars from the Intramural Sports Club budget. The 1971 yearbook notes that women’s intercollegiate teams were “coached by members of the women’s Physical Education Department and sponsored by the Intramural Department. They are in their second year.” To support travel, lodging, etc., “female athletes held car washes and other funding events.”

Athletic teams for female students were new to K-State. Women’s sports teams were coached by physical education faculty members who volunteered “during their free time,” while the men who coached were paid significant salaries by the Athletic Department (which was for men only at the time). The state of Kansas contributed significantly to their salaries. All of the women coaches were paid full time for duties in the Physical Education Department with no compensation for coaching.

As department head, I prepared a time management survey and found that coaches spent much more time coaching than teaching and performing the academic-related tasks (e.g., advising, research) of their job description. With the consent of the associate dean, I informed all coaches (including some men) who were teaching in the department that they must become either full-time faculty members in the department or full-time coaches. A two-year timeline was set.

The decision to require coaches to get funding for their coaching duties paid off. By the deadline, Judy Akers was appointed as associate athletic director for women’s sports (in the formerly all-male Athletic Department). She coached women’s basketball and softball and was instrumental in promoting women’s sports at K-State.

In the 1974 yearbook she indicated that “I am one of a handful of women’s athletic directors in the nation. Most are instructors in physical education and handle the job on the side.”

The appointment of a women’s athletic director was a crucial step in the right direction. However, lack of resources did not make the director’s job an easy one. Lack of money was the primary problem. Before Judy became officially employed by the Athletic Department, it fell to me as Physical Education Department head to appeal directly to the university president for funding, especially for travel to national tournaments for very successful women’s basketball, track, and swim teams.

Among the many problems confronting women’s sports programs were lack of a national organization overseeing women’s athletic programs, lack of access to adequate locker rooms and practice facilities and lack of respect for women’s sports (often disparaged in the press and on campus). Soon women’s coaches united to form the Association of Intercollegiate Athletics (AIAW) that sponsored national tournaments and provided rules and regulations for women’s programs. Participation in AIAW required payment of dues and travel to serve on committees, another expense for which there was no funding.

As cited in the 1971 yearbook, “Co-ed teams practiced early in the morning as well as late at night as to not interfere with the men’s varsity sports…” The construction of an addition to Ahearn Field House provided additional court space. However, only hard bargaining yielded more access to facilities over time since there were many demands for facilities (e.g., academic classes, intramurals, men’s athletics, women’s athletics).

The Department of Health, Education and Welfare (HEW) was charged with developing and administering Title IX legislation passed in 1972. However, Title IX and HEW were seen as the culprits by many. For example, Hall of Fame Sports Editor Bob Hentzen of the Topeka Capital-Journal wrote that HEW would ruin college athletics (read as men’s college athletics).

Dave Wright, the sports editor of the Manhattan Mercury also warned of the danger of women’s programs. “Don’t kill the goose that lays golden eggs.” Men’s athletics was the goose, and women’s athletics the potential goose killer. In fact, the men’s programs were not laying golden eggs; they were deeply in debt in the early 1970s.

The naysayers who defended men’s athletics and warned of the dangers of Title IX and women’s programs were wrong. Title IX made opportunities available to women but did not kill men’s athletic programs. In fact, K-State athletic programs are much stronger today than they were back then. In addition, moving coaches from academic to coaching positions allowed the physical education faculty to focus on their central mission as teachers, researchers, and community servants.

Nearly 50 years later, I look at the current K-State Athletic Department website and see a thriving women’s sports program. Much of the credit goes to the women athletes who fought for the right to participate and the women who volunteered their time to coach them. They fought for funding and the resources necessary to conduct programs. However, without Title IX the progress would not have been as fast and effective as it has been in making collegiate sports programs available to women.

Title IX had benefits for female athletes at K-State but there were benefits for faculty and non-athlete students as well. After Title IX passed, administrators made salary adjustments for female faculty members who were underpaid compared to male faculty members with similar years of service and with similar accomplishments. Classes for health and physical education majors and activity classes available to all university students became coeducational.

Now as we celebrate 50 years of Title IX, it’s good to reflect on how far we’ve come while also remembering that there is more to be done. 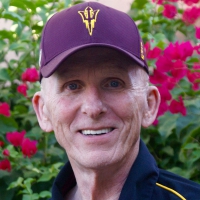 Dr. Chuck Corbin is professor emeritus at Arizona State University. He is a widely published researcher and text author. He is a past president of the National Academy of Kinesiology and recipient of many honors including the SHAPE America Scholar and Gulick Awards and is a member of the SHAPE America Hall of Fame.