My dad was a soccer player in high school and helped found a rec league in our community in East Hampton, CT, which my brother and I both played in. When I started middle school, there was no girls soccer team, and it didn’t occur to me that I wouldn’t be allowed to try out for the boys team — so I did.

I lasted one day.

The coach made every effort to make me feel uncomfortable and unwelcome — making a huge deal about ensuring I was part of the “shirts” team and not the “skins” team … and insisting that he didn’t have a key to let me into the girls locker room after practice.

I remember waiting alone in the hallway outside of the locker room for an hour until the cross country coach let me in. I didn’t return for the next practice.

When I got to East Hampton High School, once again there was no girls soccer team. My PE teacher took enough personal interest in me to introduce me to the girls basketball coach, telling him that I should go out for the team. I had never played basketball and faced a steep learning curve.

I remember being very excited when the coach shared that the school would be getting a girls soccer team in the fall. When it was subsequently cut from the budget, I was disappointed and angry.

As I recall, I recognized the injustice of not being afforded the same opportunities as the boys and was filled with righteous indignation that a team for girls was cut from the budget. I wanted to do something about it.

My mom had heard of Title IX. This was pre-internet, pre-Google. I didn’t even have access to a photocopier. My older brother, who was doing volunteer internship hours at the time in the office of our state senator (Weicker), was able to get me a copy of the law.

I asked a teacher to help me write a letter to the Board of Education. Then I had to get people to sign it. I don’t remember if there was a specific number of signatures that I needed, but it wasn’t particularly difficult to find people willing to sign the letter because the idea that girls should have the same opportunities as boys wasn’t a controversial position for students or teachers. Our town was just notoriously cheap and didn’t want to spend the money for a girls team.

Once I had the letter and the signatures, I got put on the agenda to speak at a meeting of the Board of Education. Reading the letter at the meeting was a little scary and intimidating — definitely outside of my comfort zone — but I knew it was the right thing to do and that the law was on our side. They really couldn’t say no.

Despite having no soccer experience and no coaching experience themselves, two women who taught social studies agreed to do it. We were given moldy old jerseys and soccer balls from the 1960s that my dad’s team had probably played with. We had one scrimmage against a much wealthier town (where one of our coaches lived) with a very established program. That went about as well as anyone would expect.

In 1983 — my junior year — girls soccer became an official sport at my high school. We managed our first win and our first tie during my senior year.

While it’s kind of cool to look back and take some degree of pride in the fact that I stood up against an inequitable and unfair system, on the whole I really would have rather had the experience of being able to come into high school as an anonymous ninth grader with the opportunity to learn and develop in an established girls soccer program. There have always been outstanding female athletes who have excelled despite the lack of opportunities. But I was one of the countless girls who just wanted to learn and play and have the same opportunities that were given to our classmates who were boys. 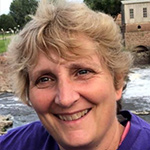 Amanda Amtmanis is a physical education teacher at Macdonough Elementary School and Spencer Elementary School in Middletown, CT. In 2019, she was a pilot school coordinator for SHAPE America’s new health. moves. minds.™ service-learning program. Follow her on Twitter @AmandaAmtmanis.